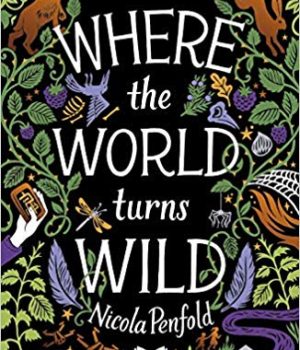 A few times a year, we receive a book for review which stops the clocks. Most of the scheduled tasks are put on hold as the book demands to be read. When the book is finished, there’s a sense of loss to not be able to carry on with the character’s story.

One such book is Where the world turns wild by Nicola Penfold.

The moment I took the book from its package, I was intrigued and began reading almost immediately.

And I was hooked.

Where the world turns wild is set in the near future, where a tic-borne disease has killed thousands and has driven the majority of the populations to live under sealed domes where all nature is banned.

Juniper and Bear live with their grandmother in one of the cities for their own safety, in the knowledge that their parents are many hundreds of miles away where the land is still wild.

But the status quo is changing. Juniper and Bear seem to be immune from the tic bites and are of increasing interest to the authorities. Juniper is also outgrowing the confines of the domes and yearns for freedom.

Soon it becomes clear that she and Bear need to start on an epic journey – one which will test their bonds as brother and sister, and also sees them both grow up.

I loved this book! Nicola’s writing has a clarity which makes it really easy to identify with her characters and the situation. The book is a call to arms about the fate of our planet too, as well as a love song for the north of England.

But in Juniper and Bear we have two new heroes. Ones which you want to cheer on from the sidelines and want to know more about. I really didn’t want this book to end.

A gem of a story.

Thank you to Stripes Publishing for a review copy of this book. Where the World turns Wild is published next week and is available from good bookshops and online.

Creativity and our wellbeing
‘Witch’ by Finbar Hawkins