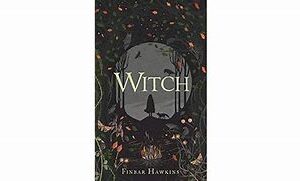 In a 17th century England ravaged by civil war, witch hunts became part of the plan to oust the king. A young, proud girl – confused by her own powers of magick – sees her mother put to death at the hands of witch-hunters.

Bold, fiery Evey swears to avenge her mother’s death, while still looking after her small sister, Dill – which comes with another set of complex emotions.

‘Witch’ is a totally immersive, lyrical story which crackles with passion and energy. Finbar Hawkins has created some female characters who are full of courage and loyalty, alongside creativity and intuition. Female relationships are at the heart of this story which also has a cracking pace.

The darkness of witch trials contrasts with the descriptions of flora and fauna inspired by Finbar’s home area. Parts of ‘Witch’ do read like a poem and all-in-all is a good story for darkening Autumn days.

‘Witch’ is for readers age 12 years plus. Thank you to Zephyr Books for a review copy of this book.