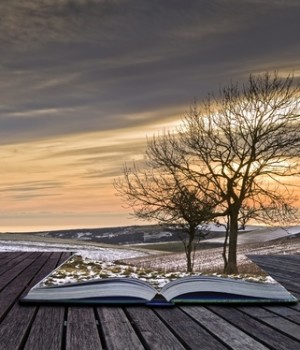 At Inkpots, it’s always an absolute delight to welcome an author along to run a workshop or visit one of our clubs.

We have recently been lucky enough to be visited by not just one author but three!

Laura Ellen Anderson came down from London on a particularly murky Saturday afternoon in mid-November, to run a workshop based around her new book, Amelia Fang and the Barbaric Ball. 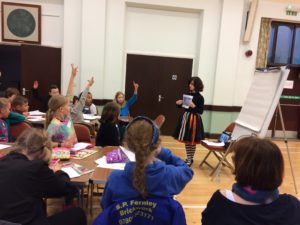 Laura created a magical atmosphere as she talked about her childhood inspirations, overcoming writer’s block and how she weaves everyday items and members of her family into her stories.

The children were fully involved too – drawing their own Amelia Fangs and creating some Revolting Recipes.

On an equally gloomy Saturday, Perdita and Honor Cargill brought sparkle and fun to the December meeting of our Writers’ Hut for children in Years 6 and 7. 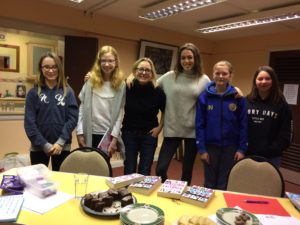 Perdita and Honor were also able to give our young writers some real insight into the whole publishing process. Loads of top tips, plus cake and chocolate were shared.

Both visits were delightful and we’re grateful to all three authors for coming down to Sussex to see us. We’ve made some great connections and it’s brilliant for us to be able to follow up these workshops in our own work.

But, for me, the most important thing is the legacy that’s been left.

Never, ever underestimate the effect that meeting an author can have on a child who wants to write or draw.

I watched children’s and young people’s eyes open wider and wider as Laura, Perdita and Honor talked about their work. To say that the Inkpots children who they met have been inspired, is an understatement.

For some children, these workshops will have been turning points in their development.

It isn’t just a feeling that I have either. In both cases, the feedback from parents has been overwhelming too.

One dad told me that his daughter had been so inspired after meeting Laura that she had started work on a story about two worlds and had written every night after school.

After meeting Perdita and Honor, one of our young writers had told her mum that the visit was ‘simply amazing’.

So, a million thanks to Laura, Perdita and Honor.

And if you get a chance to meet an author – maybe at your local bookshop or school – grab it with both hands. You just never know where the journey might go.

Happy weekend! Hope you have time and space to relax and refresh.

Our monthly newsletter is in preparation for delivery to in-boxes next weekend. We cover new books, creative ideas and well-being for teens. If you’d like to join our much-valued subscriber list, please click on the link: http://eepurl.com/dtGZ65

The signs have been read, the rituals performed. It brings me great pleasure, dear reader, to welcome you to the arcane city of Arkspire...

Arkspire is my brand new children's book, the first in a trilogy! ts published by @PuffinBooks and is coming on the 6th of July, 2023!

Lovely walk into @TBHAcademy this morning for a day of mentoring with Year 9 and Year 8s at lunchtime. The week before the week before half term - and lots of tiredness creeping in for students. Plus the longest January EVER!

The Inkpots newsletter is going out to subscribers

Welcome to Inkpots and thanks for following along

One of my students asked yesterday what my favouri