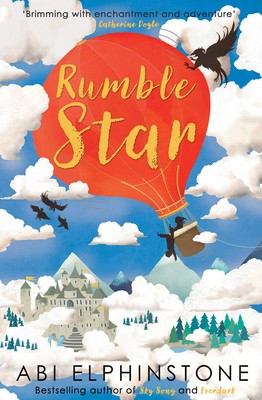 A new book by Abi Elphinstone is always a celebration at Inkpots. To have two close together is definite party time.

Abi is a writer of great depth and skill, and she creates characters which resonate completely with her reader because they are so well-rounded and thoughtfully developed.

It was with a sense of wonderful potential then that I approached the reading of first Everdark and then Rumblestar. These books mark the arrival of a new series, The Unmapped Chronicles which means more books to come (rubs hands with glee!)

Abi has created a world of sea dragons, sand goblins and silver whales. There are cloud giants, drizzle hags and kingdoms of magic.

The main characters of Everdark are Smudge and a monkey called Bartholomew who is reluctantly at her side. Smudge has always thought of herself as clumsy, always in the wrong place at the wrong time.

In Rumblestar, 11-year-old Caspar lives a careful life governed by plans and lists but he is suddenly caught up in another world which plunges him into a chaotic adventure with an unlikely companion called Utterly Thankless and her tiny dragon, Arlo (would like one, please).

Both Smudge and Caspar’s challenges centre around a harpy called Morg and her evil plans to steal the unmapped magic for herself.

Children will identify with both Smudge and Caspar – they both have internal challenges that many of us have. But, as with other of Abi’s books, there are wonderful messages about the power of friendship, and how we are all brave in our own ways.

Reading these books has been such a treat, and it was a joy to dive into the world of the Unmapped Chronicles.

Everdark was published for World Book Day and is available for 99p. Rumblestar can be pre-ordered now for publication at the end of May. Thank you to Simon and Shuster Children’s Books for our review copy.

All change at Inkpots
Creative space at The Burgess Hill Academy