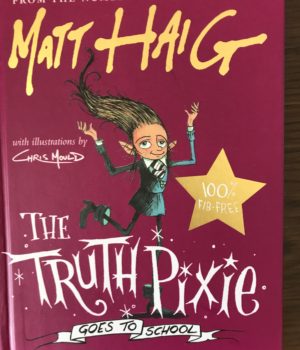 A new book by Matt Haig is always an occasion but two quite close together is a real treat!

The Truth Pixie came out to much acclaim last year and now she’s back! She lives with Aada, along with Marta the Mouse who lives in Aada’s hair.

The first book deals with loss and sadness through gentle humour and life-affirming advice. In this second book, ‘The Truth Pixie Goes to School‘, Aada has moved to a new town and has to start a new school. When bullying starts, the Truth Pixie is at her side. Telling the truth.

But Aada decides that she needs to fit in to make friends and changes her behaviour. This may to seem to solve one problem but leads to The Truth Pixie and Aada parting company and the pixie returns to her own home. But there are problems there too.

Without spoiling the story, happily Aada and the Truth Pixie are finally reunited but not before they have both learned about themselves.

This small but mighty book is written in easily accessible rhyme and beautifully illustrated by Chris Mould. It’s great for children who may be worried about starting a new school or moving class, but it’s the kind of thing that’s perfect for a family library as its message is for all of us.

As the Truth Pixie says: ‘Don’t try to be something you really are not. Your one true self is the best thing you’ve got.’

You can read our review of original ‘The Truth Pixie’ here. Publication date of the new book is 1 August and there is also an audiobook read by Olivia Coleman.

Evie and the animals is also by Matt Haig and has been perfectly illustrated by Emily Gravett.

Evie has a special power of being able to talk to animals. But it’s something that she keeps very quiet, especially as her dad doesn’t want anyone to know. But then Emily feels compelled to release the school rabbit who is so unhappy in the tiny hutch it’s in.

After that events take a complicated turn which involve a lion, a dangerous man and Emily’s own challenge to really be herself.

I really enjoyed this book. It’s a great story with a special twist. But totally believable characters, well formed by Matt Haig.

A double treat indeed! Thanks very much to Canongate for gifting copies of both books.

Thank you
New group at The Burgess Hill Academy