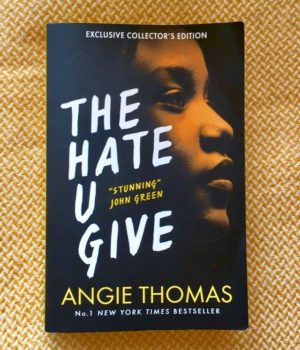 After witnessing her best friend Natasha’s death in a drive by gang shooting aged only ten, sixteen-year-old Starr hopes she will never experience such trauma again. But when history repeats itself and Khalil is shot- unarmed – by a white police officer, she is torn about whether to expose herself as the sole witness, and risk her reputation at her prestigious white majority high school…

My somewhat battered copy reflects how this book felt to read: it was an assault. Thomas doesn’t shy away from the harsh reality of growing up in a place like Garden Heights: caught in the middle of an ongoing gang feud, its residents flinch at gunshots while watching basketball and live constantly looking over their shoulders.

But the author also doesn’t forget the strong sense of family so integral to the community. When the Grand Jury’s decision rocks the estate, everyone pulls together. When the Carter family grocery store is threatened, they protest. The people of Garden Heights are real and resilient despite their grief and Thomas excels in breaking down stereotypes that plague Starr’s life.

In amongst it all, she is just a normal teenage girl. She navigates the challenges that come with her first relationship (with a white boy, who she’s scared her dad won’t approve of) being proud of her roots (which she tries desperately to hide from her school friends) and moving away from home (where she’s lived her whole life).

This novel has incredible passion which I, as an ignorant white person, learned a lot from. Overall, the Hate U Give is a brilliant introduction for young adults to the wider conversation surrounding police brutality, #BlackLivesMatter and the importance of using your voice. It reminds us to never give up and never be quiet about things important to us.

The Hate U Give film adaptation is heading to UK cinemas on November 2nd! Devour the book first, or watch the trailer here