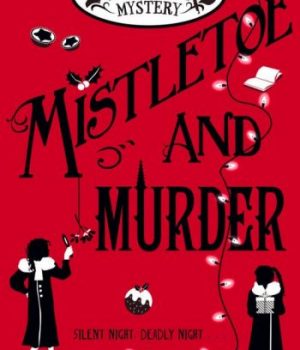 This is the fifth book in the Wells and Wong Detective agency series with a return for all the favourite characters from the previous four books.

The book again is told through the eyes of Hazel Wong and her best friend Daisy Wells. The two girls seem to have an uncanny knack for attracting mysteries and murders. This book is set in 1935 and the girls, now 14 are allowed to go up to Cambridge to spend Christmas with Daisy’s brother, Bertie.

The story focuses on the mystery that surrounds two brothers, Chummy and Donald and their explosive sibling rivalry over their potential inheritance which just happens to come about on Christmas Day. Bertie has told Daisy that he thinks there are likely to be problems and that the two brother hate each other. So the girls are ready to look for possibly intrigue, especially as Chummy likes to play pranks on his brother Donald which seem to be getting more dangerous. However, the consequences of these pranks suddenly become very serious when an actual murder occurs!

Once more the Wells and Wong Detective Agency are involved in trying to solve the mystery. However this time they not only  face competition from a rival ‘ boys’ detective agency,  the Junior Pinkertons, but being girls they find that many doors are not open to them in male dominated university system. They are forced to work together with Alexander and George aka the Junior Pinkertons.

The story is a fast paced book with lots of twists and turns and as always in any murder mystery, just when you think you have solved it, then something happens to prove you wrong!

It also is very clever book as it touches on a range of the social attitudes of the 1930s era – women not being allowed the same freedoms and opportunities as men and the attitudes towards people from a different country. Hazel has faced this continually in past stories, as she has been sent to Deepdean School from Hong Kong by her father. It also begins to touch on teenage relationships and Hazel’s friendship with Alexander.

I would recommend this book mainly to girls who are 8+ but I would suggest to fully appreciate some of the prior references made in this book that at least the first two books are read before this one.

All in all it is a very pleasurable read, with short chapters which help to maintain the pace and momentum of the story.

Rachel is mum to Ruby and Lara who come to Inkpots and are both avid readers and writers. She is also Deputy Headteacher at a local primary school.