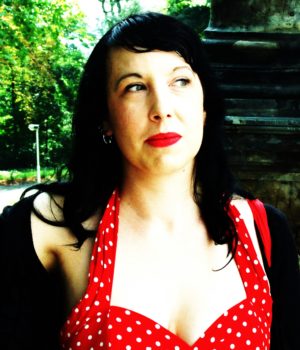 Do you write in silence or do you need some noise around you?

I’m a noise-needer! I often write in cafés, amidst all the clatter and chatter. If it’s sunny, I write on my little balcony so I can hear the general buzz of the outside world, with a pair of pink flamingos for company (not real ones sadly!). The only time I need silence is when I’m puzzling over a plot problem.

How long do you write per day?

It varies a lot, depending on what stage of writing I’m at. For example, if I’m at the early, developing-an-idea stage, I tend to write for the whole day and into the evening, letting my thoughts flutter out and onto the screen, whereas if I’m further into a book, I tend to write in shorter bursts (maybe up to three or four hours at a time). Having said that, a looming deadline never fails to keep me going…

Do you type or write?

I write directly onto my laptop, which makes it so much easier when it comes to moving bits around, and changing ideas (especially the particularly fluttery ones – see above!). If I’m out and about, I make notes in my phone. If I’m on holiday, I also take a notebook.

What is your favourite book that you didn’t write?

Now that is a tricky question! One author I’ve re-read a lot is Eva Ibbotson, especially her amazing Amazon-set adventure Journey to the River Sea, so perhaps that. I also love the novels and stories of a writer called Jean Rhys, and wish I had her talent for expressing so much in so few words. But, having said that, it’s important for writers to discover their own writing “voice”, so you’re able to write the kind of book you really want to read, and you’re proud to have written!

When did you start writing? Do you go to anything like Inkpots?

When I was about six or seven, I think, when I used to write poems, stories, and my own versions of some of my favourite books. I wish I’d been able to go to something like Inkpots back then – attending writing workshops, and having support from fellow young authors must be an incredibly inspirational experience.

Do you have a journal? 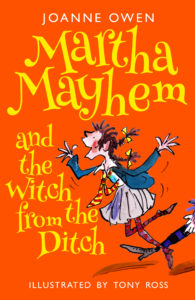 I don’t keep a journal as such, but I do make notes about places I travel to, fascinating facts I discover, and things I overhear – you never know when an experience or snippet of conversation might make a good story. For example, a few years ago, I was exploring the Caribbean island of Grenada when a nature guide mentioned that nutmegs are often known as ‘the lady in the boat with the red petticoat’ because the nutmeg seed (the lady) inside the fruit (the boat) is covered in a red, lattice pattern (the red petticoat). I jotted this into my holiday notebook (see above!) and, lo and behold, the second Martha Mayhem book (Martha Mayhem Goes Nuts!) is about the mayhem that ensues when Martha magically makes a Naughty Nutmeg Lady come to life. She pops out of an ACTUAL nutmeg, clouded in crimson smoke, wearing (you’ve guessed it…) a red petticoat.

Who is your greatest critic?

I am! I spend a lot of time re-writing, editing, re-writing, editing, and so on. In fact, I’ve re-written my answers to these questions approximately 53  times. Joking aside (although that wasn’t entirely a joke), editing and re-writing is a HUGELY important part of the writing process. Writing a first draft is only the beginning of creating a special piece of writing, but it’s so important to finish that first draft, and to not be too critical too early on (this is something I need to remember – be critical, but GET IT DONE!). I’m also lucky to have a very smart agent and editors with expert critical eyes!

Are any of your characters based on real people?

I must confess that Martha Mayhem is partly based on me. I share her exceptional ability to (accidently) break things and make mayhem. In my world, much like Martha’s, there’s always something that needs fixing. Originally, Martha was a kind-of nickname for me between my sister and I (talking of whom, Martha’s mayhem-averting mum, Margarita, is partly based on my less pandemonium-prone sister). I also share Martha’s love of magic, milkshake, scrambled eggs, prickly pineapples and handsome, hairy hogs.

Apart from Martha, one of my previous books (The Alchemist and the Angel) features my take on a real-life historical figure – the enigmatic Emperor Rudolf of Prague, who employed mysterious alchemists in his fancy castle court way back in the 16th century.

Brilliant Joanne! Thanks so much!