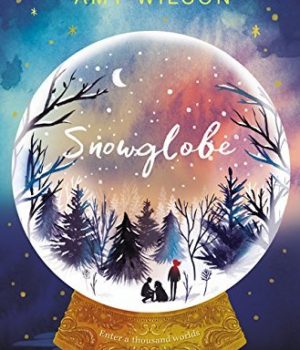 This is a truly original and magical book with a surprising premise of there being life inside snow globes. As someone, who had a collection of snow globes and delighted in shaking them, then this book only adds further to their enjoyment and air of mystery.

The story centres around Clementine, who finds that she doesn’t fit in at school and takes solace in daydreaming. However, right from the opening chapter, we realise that the reason she doesn’t fit in is due to her magical inherited powers! From then on, the magic continues, as Clementine comes across a new, mysterious house which has suddenly arrived in the centre of her town. She is drawn towards the house and finds it full of hanging snow globes, each containing a trapped magician stuck in time. These trapped magicians have all been placed there for some reason linked to Clementine’s absent mother, Calisto and her two sisters. Clementine vows to find out why and rescue each and every one of the magicians, hoping to uncover the truth about her missing mother. However, along the way, as Clementine’s magical powers increase, she is forced to meet and attempt to defeat her mother’s sisters Ganymede and Io.

The story is essentially a magical adventure story with Clementine teaming up with Dylan, a boy she knows and dislikes from school but who has now become trapped in one of the snow globes with his trusty dog called Helios.

The book is beautifully written with some glorious descriptions of the individual contents of each and every snow globe. Each snow globe’s characters and story add a new piece to the puzzle of the book until the final battle for the future of the snow globes occurs.

I would totally recommend this book to both boys and girls aged 9 – 11 who love magical, adventure stories.

Rachel is Headteacher of Castlewood Primary School, Horsham and mum to two Inkpots, Ruby and Lara.

Max and the Millions by Ross Montgomery: it’s all in the details
Author spotlight: Laura Elllen Anderson