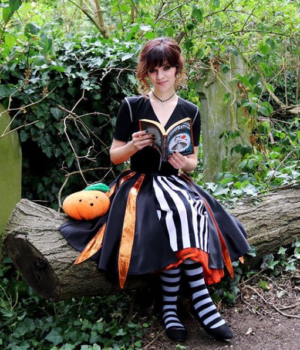 We’re lucky to have author and illustrator Laura Ellen Anderson taking time out of her busy schedule to run an author masterclass for us on 2 August! Here’s all you need to know ahead of her visit…

Laura is a lover of all things autumn and often can be found doodling her characters in her spare time. When she isn’t writing and illustrating her book series Amelia Fang – which follows the adventures of a young vampire and her pet pumpkin Squashy – she’s also working on her comic strip in Phoenix comics, the hilarious (and evil) Evil Emperor Penguin! The next instalment of the Amelia Fang series, Amelia Fang and the Memory Thief will be published by Egmont on 4 October!

She also recently published her first picture book I Don’t Want Curly Hair! which is all about loving how we look and regularly shares her own – and other’s – fan art over on Twitter.

This masterclass will be bigger and better than the last, with lots of new ideas – we can’t wait! Book your place here or take a look at more of Laura’s work here.