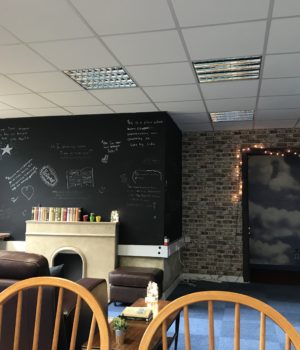 Over the past term, we have been working hard to transform a room at the Burgess Hill Academy into a vibrant creative space for the students who come to Inkpots.

As we approach Christmas, a natural pause in proceedings has given us the chance to review how far we’ve come.

We are sharing the various stages of the project in the hope it may help anyone else involved in a similar project.

Inkpots started running a lunchtime group at the Burgess Hill Academy in September 2017. At first, we met in a spare classroom, then moving to our current space nine months later.

The room we were allocated has many positive features. For a start it is just off the library which feels like the natural place for a group like Inkpots. As it is on an upper level, the views through the large windows are quite magnificent – the South Downs are visible in the distance, with established trees and bushes in the school grounds just outside the room.

And it’s big! The room had been an IT space so there was plenty of computer desk space, and an absolutely huge walk-in cupboard.

But the room hadn’t been used for some time and it felt unloved.

We were delighted though to have a bigger space. And then came the suggestion from the Academy that it could be ours – and ours to change as we wished.

The students who come to Inkpots were absolutely instrumental to the design of the space.

Some of their ideas were ambitious but the spirit of this project has always been to think as creatively as possible and see where that leads us.

Throughout this project, we have been completely supported by the Academy’s principal, Mr Francies. One lunchtime visits from him led to everyone embracing a ‘common room’ approach along the lines of the ones at Hogwarts. We started a Pinterest board to gather inspirations and ideas as we waited for the room to be stripped of the old fittings.

It was also important that we looked at how the room could function as a creative space in practical terms. As it is generous in terms of size and light, we decided to create zones. We wanted to provide a communal area, a relaxing space, ‘work’ areas (we had been given a computer by one of our parents too) and a quiet zone in the converted walk-in cupboard.

I felt strongly that the room needed to provide contrasts so that it really served the young people using it – so that we have the communal areas alongside the chance to be quite solitary, and plenty of inspirations and resources while at the same time offering a blank canvas to create from scratch.

There have been several times during the project when it has felt that a massive step forward was taken. One such ‘game changer’ was over the summer holidays. We had been given some paint by our local branch of B&Q, and Virgin Media supplied volunteers who painted the room for us. The Academy had the room re-carpeted and the glass wall through into the library was screened off.

On our return at the start of the term therefore, we were met with a blank canvas. Suddenly, we really could envisage our plans becoming a reality. The project began to speed up and I needed to draw upon my project management skills to ensure that all the equipment needed was in the right place at the right time and all the interested parties were kept in the communication loop.

Another great stroke of fortune at this time was the support of one of our parents who is a scenic artist. It just happened that she was able to give some time to the project and her considerable skills meant that she could translate our ideas into action. And then some!

September and October saw many sessions of decorating, painting, and general repairs. We re-purposed as much as possible from the room and the support of the Academy’s site team was imperative here too.

One of the highlights was the customisation of an old desk into a bespoke table complete with stencilled stationery items. A one-off and unique to the project.

Also, at this time, we were lucky enough to get some funding from our local Lions Club which meant we were able to buy wallpaper, a mural and material for creating a tented ceiling. We were also able to buy soft furnishings, and some of the thousands of fairy lights integral to the scheme. And a sofa!

For a time, the students were arriving for their group meetings every week to yet another big development with the room. Now the space is almost finished, those big reveals are not just happening. But it is the time to attend to the details. One of the things we’re currently working on is our shelf of inspirational oddities – a collection of all kinds to inspire stories, pictures and more creativity.

We have also found out that our local branch of Waitrose has just chosen the project for its Community Matters collection in December (please support us if you are local!). This additional boost means we’ll be able to finish the room – especially the bean bags we need for the quiet area. And more fairy lights.

We also want to be able to stock the room with all the resources needed to ensure the students can embark on some very ambitious creative projects.

Something which is also emerging is just how much the students value the space. It isn’t just having a dedicated room which is important to them, it’s also about having space to think, create and be.

To sum up, these are the learning points on our journey:

*Create a vision which everyone involved buys into;

*Communicate your ideas and tell the story of the project to as many people as possible:

*Harness any skills your volunteers or team members have;

*If your project is of a substantial size, you’re going to need a plan to keep track of all the activity and also keep momentum going;

If you are working on a similar project, we would love to hear from you, and will happily share more of our experience to date.

You may also be interested in a free online creativity course we’re running next week. More details can be found HERE.